For the 5th anniversary of X51, we are hosting a series of fun and unique events in DCS, IL-2 and War Thunder!

There are several events per sim spanning four days from the 12th to the 15th of March. Feel free to sign up for as many or as few as you wish. Everyone is welcome!

Race JU-87s across the ground. With a much thinner atmosphere than at sea level, you'll be doing Toyko drifting instead of taking off.

A battle in the Pacific between the US and Japan. If we don't have enough Japanese players, we can add another nation to axis.  Tier 3, BR MAX 3.7

Similar to the Stuka race, but down a river in the float plane of your choice!

The IL-2 events take place at 1900 GMT  on Sunday 15th as one big event called The Sturmovik Trials. The rounds of the event are as follows:

The classic 1V1 duels. Same aircraft, neutral merge and only you BFM skills to establish yourself as the best pilot. The twist? The plane-set is randomly decided!

Two fully crewed HE-111's with a pilot and gunners spawn in the air, head-on and fight to the death in hilarious and exciting sky-pirate fashion.

It’s the last stuka standing! A Free-For-All of Stukas equipped with the 37 mm cannons or the machine gun pods. Good aim, BFM skills and ammo conservation is the key to winning this challenging JU-87 frenzy.

You love flying low and showing off? Prove it in this literal barnstorming event. You have to fly through as many hangars as possible. Did we forget to mention that only twin engine aircraft were allowed? If you are still feeling cocky, you get more points for flying in inverted!

A dirty close quarter engagements where guns are prohibited. You will have to use rockets, bombs and even your own plane to bring your opponent to the ground. The winners is the last plane to touch the ground!

This last event will pit the best pilots against all the others in a very unfair team-fight! Let see if they are up to the task!

Important: We will be running the latest Open Beta for all DCS events

The DCS: World events are as follows:

Based off of the iconic Simpsons episode "You only move twice", this mission enacts the raid of Hank Scorpio's Globex Corporation mountain lair. Chopper and CAS pilots required! The mission situation can be read here:

Helicopter logistics is crucial is dynamic DCS campaigns - but why not use the common CTLD logistics mechanism for something a little different? In this relay race, the batton will be passed between Hueys via the CTLD menu. One must land, unload the baton and have theit team mate pick it up and continue the race!

DCS has a very steep learning curve, and this puts many people off trying it. If you're interested in trying DCS for the first time, come to our bootcamp! It's free to install and comes with two free aircraft: SU-25T and T-51D. We'll teach you how to set it up, get your key bindings in order and get in the air! 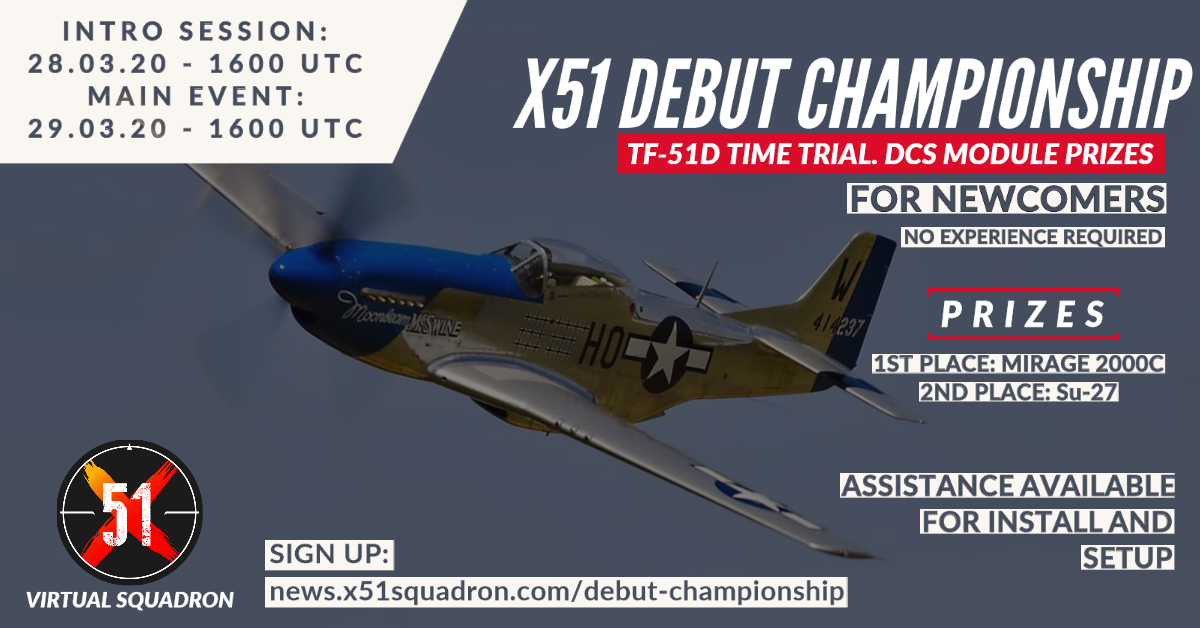 The X51 Debut Championship is an air racing event in DCS: World, aimed at introducing complete novices to the simulator. The time trial will use the TF-51D, a completely free

For the 5th anniversary of X51, we are hosting a series of fun and unique events in War Thunder! To sign up, please fill out the for form below. Everyone